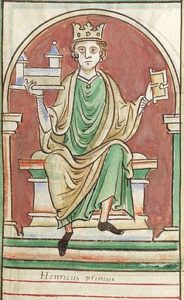 Henry I (c. 1068 – 1 December 1135), also known as Henry Beauclerc (fine scholar), was the brother of William II and fourth son of William the Conqueror.

Henry became King of England following the death of William II Rufus, who had been killed by an arrow while hunting at Brockenhurst in the New Forest. Henry was one of the hunting party when King William Rufus died. Henry decided to take quick action to gain the throne as soon as he realised William was dead. Henry rode off at full speed to Winchester where the government’s money was kept, and took possession of all his brother’s treasure.  After gaining control of the treasury, Henry proclaimed he was the new king. He was accepted as King by the leading Barons as his other brother, Robert was absent on crusade and Robert had a poor reputation among the Norman nobles.

Taking advantage of Robert’s absence, Henry was hastily crowned king in Westminster Abbey on 5 August, only three days after William II’s death. The service was conducted by Maurice, the Bishop of London, as Anselm, the Archbishop of Canterbury, had been exiled by William Rufus, and Thomas, the Archbishop of York, was in the north of England at Ripon.

Henry moved quickly to consolidate his coup and secured his position among the nobles by an act of political appeasement: He issued a Charter of Liberties which is considered a forerunner of the Magna Carta. The Charter promised that the king would refrain from such practices as confiscating church property and levying unfair taxes thus promising to reform the abuses of his William II’s reign.

Henry married Matilda of Scotland (c. 1080 – 1 May 1118), originally known as Eadgyth or Edith of Scotland on  11 November 1100 at Westminster Abbey by Archbishop Anselm of Canterbury. She was crowned as “Matilda,” a more popular Norman name.

Henry married Adeliza of Louvain  on 24 January 1121. Her coronation was conducted by Ralph d’Escures, Archbishop of Canterbury on the 30 January 1121 at Westminster Abbey.