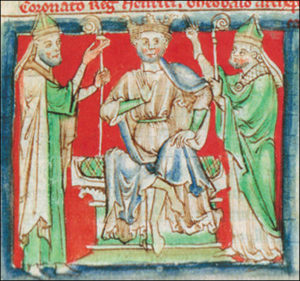 Henry II was also known as Henry, Henry FitzEmpress or Henry Plantagenet, and was the son of Geoffrey of Anjou and Matilda, daughter of Henry I of England. Henry inherited the throne at the age of 21 whilst in Normandy when King Stephen died on 25 October 1154. Inheritance of the crown was based on the Treaties of Wallingford (1152) and Westminster (Dec 1153).

Henry returned to England on 8 December 1154 and quickly took oaths of loyalty from some of the barons. He was then crowned alongside his wife Eleanor of Aquitaine, at Westminster Abbey on 19 December 1154. Theobald of Bec, Archbishop of Canterbury conducted the ceremony. 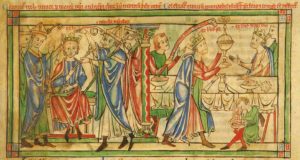 Henry, known as the Young King

Henry, known as the Young King, was the second of five legitimate sons of Henry II of England and Eleanor of Aquitaine but the first to survive infancy. He was known in his own lifetime as “Henry the Young King” to distinguish him from his father. Because he was not a reigning king but a “co-ruler” with his father, he is not counted in the numerical succession of kings of England. The king Henry II wanted to avoid future disputes over the succession.

On 14 June 1170, Henry at just 15 years of age was crowned king during his father’s lifetime. This was something originally practised by the French Capetian dynasty and adopted by the English kings Stephen and Henry II. The coronation was performed by Roger de Pont L’Evêque, Archbishop of York at Westminster Abbey. The event only renewed the long-lasting dispute over primacy between Canterbury and York. Four English bishops assisted at the ceremony. These were Hugh of Durham, Gilbert of London, Jocelyn of Salisbury and Walter of Rochester. The Norman bishops present were Henry of Bayeux and Giles of Evreux.  The coronation was considered illegal and Roger and the bishops who assisted him at the ceremony excommunicated.

Young Henry swore with both hands on the altar, on which lay the Gospels and relics of the saints. His oath made him vow to maintain the liberty and the dignity of the Church. To stress the sacrality of the ceremony, and could have been anointed with oil of chrism rather than the usual oil of catechumens.

The coronation of 1170 proved to be a cardinal blunder on Henry II’s part. It was done against the pope’s wishes and only added weight to Thomas Becket’s cause against Henry II’s desires to curb the power of the Church. The clash between Henry II and Becket culminated on Tuesday, 29 December 1170, when Thomas Becket was murdered in his own Cathedral by four Henry’s knights.

Young Henry’s wife, Margaret of France, was not crowned along with her husband because Archbishop of Canterbury, Thomas Becket was in exile. This omission and the coronation being handled by a surrogate greatly angered her father King Louis VII of France. To please the French King, Henry II had his son and Margaret crowned together in Winchester Cathedral on 27 August 1172. The ceremony was conducted by Rotrou, Archbishop of Rouen.

Young Henry lived for a time in the household of Thomas Becket and formed a strong relationship to the Archbishop. Also by making his son a king only in name and retaining most of the administrative power and monies for himself, the king would drove the resentful, powerless, ambitious youngster, to rebellion. With the backing of his mother, brother, discontented barons, kings of France and Scotland and other counts, the Young King would bring about the greatest crisis of his father’s reign resulting in the war that would become known as the Great Revolt of 1173-74. Young Henry died June 11, 1183 in Martel, Lot, France. This left his father Henry II to rule another six years filled with continued discord between him and his remaining sons.