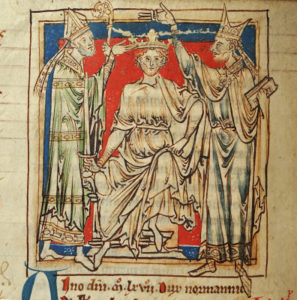 After being victorious at the battle of Hastings against Harold Godwinson or Harold II, William marched to London overcoming any local resistance encountered.  The Anglo-Saxon Chronicle indicates, a group of senior figures, including Earl Eadwine of Mercia, Earl Morcar of Northumbria, Edgar Etheling of Wessex, Ealdred, Archbishop of York and “all the best men from London, submitted from force of circumstances… They gave him hostages and swore oaths of fealty, and he promised to be a gracious lord to them.” The English were anxious, because the country was in political limbo without a king. The Normans wanted the rewards of victory and to achieve such, William needed to be crowned. William claimed to be the successor of Edward the Confessor, and insisted on being crowned near his tomb, so William was crowned in Westminster Abbey on Christmas Day 1066.

Stigand, archbishop of Canterbury did not perform the coronation ceremony as had become custom. Stigand flatly refused “to crown one who was covered with the blood of men and the invader of others’ rights.” Instead Aldred, archbishop of York conducted the coronation ceremony. As not all English spoke French nor did many French speak English, Aldred presented the new king to the people, speaking in English with Bishop Geoffrey of Coutances speaking the words in French.

Chaos erupted when the French-speaking Normans and English-speaking Saxons then shouted their affirmation and approval of William as King. The Norman soldiers who were positioned outside Westminster Abbey mistakenly thought the cheering and shouting inside was an assassination attempt. The loyal Norman soldiers immediately began to retaliate. They set fire to houses around the Abbey and the church then filled with smoke. The congregation fled and riots broke out.

William refused to postpone the celebration. Archbishop Aldred and some terrified priests from both sides completed the service despite the chaos. In haste and confusion, William the Conqueror took the usual coronation oath of the Anglo-Saxon kings, making, as an addition of his own, the solemn promise that he would treat the English people as well as the best of their kings had done. William, in his Coronation Oath, swore to “maintain the Church of God and all Christian people in true peace; to prohibit all orders of men from committing injustice and oppression, and to enjoin the observance of equity and mercy in all judgments.”

William I’s wife, Matilda of Flanders, was crowned queen on 11 May 1068 in Westminster during the feast of Pentecost, in a ceremony presided over by the archbishop of York. Three new phrases were incorporated to cement the importance of English consorts, stating that the Queen was divinely placed by God, shares in royal power, and blesses her people by her power and virtue. She was the second Queen consort to have a coronation after Aelfthryth, the wife of Edgar the Peaceful on 11 May 973.