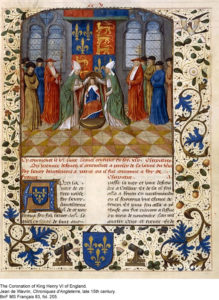 Henry VI was the only child and heir of King Henry V and Catherine of Valois. He was the youngest person ever to succeed to the English throne at the age of nine months upon his father’s death on 31 August 1422. On 28 September 1423, the nobles swore loyalty to Henry VI. They summoned Parliament in the King’s name and established a regency council to govern until the King should come of age. One of Henry V’s surviving brothers, John, Duke of Bedford, was appointed senior regent of the realm and in his absence at war, Henry V’s other surviving brother, Humphrey, Duke of Gloucester, headed the government of England and was appointed Lord Protector and Defender of the Realm. After the Duke of Bedford died in 1435, the Duke of Gloucester claimed the Regency himself, but was contested in this by the other members of the Council.

Henry VI was crowned twice in England. He was crowned on Sunday, 6 November 1429 at Westminster Abbey. The service was conducted by Henry Chichele, Archbishop of Canterbury. The second time at Notre-Dame in Paris, on 16 December 1431. This ceremony was performed by Henry Beaufort, Bishop of Winchester, son of John of Gaunt. 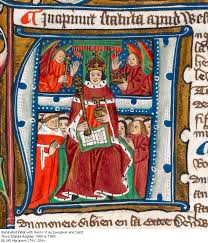 The coronation in England was in response to the collapse of the Siege of Orléans and was a move recommended by Henry’s English and French advisers. His English coronation had already been postponed for seven years, and John of Lancaster, 1st Duke of Bedford, was the one to suggest the idea of his French coronation in Paris, as there was no reason to further postpone his coronation until he came of age. The French coronation was based on the Treaty of Troyes which gave the French crown to King Charles VI of France’s son-in-law Henry V of England and Henry’s heirs.

Henry abandoned the tradition of being anointed with two oils provided by the Abbey and was solely anointed with the Becket oil from the ampulla. During Henry’s coronation as king of England in 1429, poems by John Lydgate were read to stress further Henry’s dual inheritance of England and France. A direct link was made between Henry and his grandfather, Charles VI. There was also a mention of the king’s descent from Clovis I. Henry’s coronation was redesigned to reflect his reign over two realms. The ceremony did not begin with the traditional recognition and acceptance but had some aspects copied from the French service.

On 23 April 1430, Henry embarked from Dover for France in company with Cardinal Beaufort, the Duke of Bedford and the bishops of Thérouanne, Norwich, Beauvais and Évreux. On 16 December 1431, on the way to his French coronation in Paris, Henry travelled to the Basilica of St Denis, a hallowed burial place for French kings on the outskirts of Paris. Henry was preceded by twenty-five trumpeters and a guard of between two and three thousand men. The royal party’s route took the usual ceremonial entry into Paris from the north. 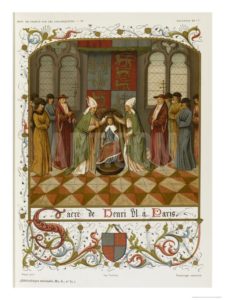 With trumpets sounding and fleurs-de-lys flying, the procession proceeded over the Seine bridge to the Île de la Cité, where the young French King kissed the Holy Relics at the Sainte Chapelle. The route traversed to the western part of Île de la Cité carefully missing the Cathedral and then moved east to the Hôtel des Tournelles where Anne of Burgundy and the Duke of Bedford awaited their royal nephew.

The following day, the King waited to the east of the city for his coronation. Preparation was done for the hallowing at Notre-Dame, and the gold draperies were taken down until the coronation day. The newly anointed and crowned sovereign would be seated on a great raised dais. Stairs were covered by azure cloth sewn with fleurs-de-lys from the top of the structure down. The English Chapel Royal choir joined the choir of the cathedral of Paris, who sang their traditional polyphonic music during the coronation. Cardinal Beaufort did the actual crowning, which was traditionally an office to be performed by the bishop of Paris, who was further shocked that Beaufort also celebrated part of the Holy Mass service at the chapel, another office which properly belonged to him.

Apart from its splendour and glory, the French coronation ultimately achieved little politically with relations between England and France. 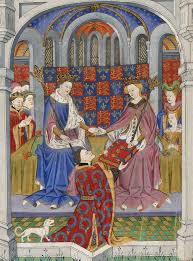 Henry married Margaret of Anjou, the niece of King Charles VII, at Titchfield Abbey on 23 April 1445, one month after Margaret’s 15th birthday. She was coronated as Queen consort on Sunday, 30 May 1445 at Westminster Abbey. The service conducted by John Stafford, Archbishop of Canterbury.

On Friday, May 28, 1445, Margaret arrived at Blackheath, where she was greeted by the mayor of London, the aldermen, and various commons.  Behind Margaret in her splendidly decorated chariot rode chariot after chariot of ladies. Their names are unrecorded, but it’s likely that anyone of rank who was present in England had come to London for the festivities. Margaret’s destination that Friday, in accordance with custom, was the Tower of London, where Henry VI received her.

On her way to the Tower, Margaret was honoured with two pageants: one at the Southwark approach to London Bridge, the second upon the bridge itself. Because Margaret’s marriage had been made in exchange for a truce with France, the pageants emphasized–rather ironically in hindsight–Margaret’s role as peacemaker. The figures of Peace and Plenty were on hand to greet Margaret for the first pageant (where she was also enjoined, equally ironically, to be fruitful and multiply). The second pageant compared Margaret to Noah’s dove of peace. Six more pageants were in store for Margaret, many of them also emphasizing Margaret’s role as peacemaker.

Margaret rode to Westminster on Saturday, May 29, in a litter draped in white cloth of gold and drawn by two horses likewise decked in white satin and or damask powdered with gold. Margaret herself was clad in white damask powdered with gold. Her hair was combed down around her shoulders; upon her head she wore a gold crown with rich pearls and precious stones. The city conduits ran with wine, both white and red, for the people to enjoy.

A detailed description of her coronation ceremony does not exist, although it is surmised that Margaret, followed by a bevy of duchesses and other noblewomen, was probably led by bishops and by the Abbot of Westminster into Westminster Abbey, where she knelt before the altar and then prostrated herself. After that, she would have been anointed and crowned. Henry VI may not have been present during the coronation.