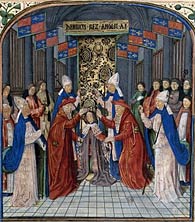 Henry V was the son of 20-year-old Henry of Bolingbroke (later Henry IV of England), and 16-year-old Mary de Bohun, grandson of the influential John of Gaunt and great-grandson of Edward III of England. The young Henry was knighted by his cousin, Richard II, during Richards Irish campaign. He was created prince of Wales at his father’s coronation in 1399. He was further given his grandfather, John of Gaunt’s title of Duke of Lancaster in November 1399.

After Henry IV died on 20 March 1413, Henry V succeeded him and was crowned on 9 April 1413 at Westminster Abbey, London, Kingdom of England.  Thomas Arundel, Archbishop of Canterbury conducted the ceremony, the same archbishop who had crowned the king’s father in 1399. At the time of the coronation there was a terrible snowstorm that swept across the country and the common people were undecided as to whether it was a good or bad omen. Some took it to be a sign of impending austerity, but others, saw it as a positive sign, the cold and snow would bring an end to difficult times and usher in a new era of hope and prosperity. To them this was the beginning of a spring. 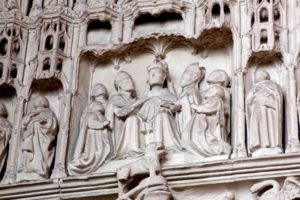 Not a great deal is recorded of the coronation. It probably kept tradition.  King Henry V arrived in London two days before the coronation on April 7th. He was met by a number of lords and knights as well as clergy and citizens in procession. Henry took up residence at the Tower. There he was met by fifty or so candidates for knighthood who waited upon him at table at a feast that evening. The next day they attended Mass, after which they rode in splendid array to the royal lodgings. Here they waited upon the King who dubbed them and as Knights of the Bath. The knights escorted Henry V through the city that day to Westminster in readiness for the coronation. There Henry V was received in procession and escorted to his palace to prepare in prayer for his anointing.

Henry’s relatively short procession from the Tower of London to Westminster Abbey was slow, as the attendants had to regularly stop to shake snow from the silken canopy they were holding over their new king’s head. 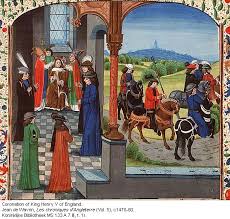 It is believed that the oil used to anoint the King was the same as that which had been used for his father. It was considered to have been delivered by the Virgin Mary to St Thomas Becket and carried back in its ampulla by Edward Prince of Wales, and treasured by his son King Richard II.

Apparently King Henry V dropped something on the floor during the coronation, and both he and those who were present had to search carefully to find it before it could be offered up.

The Coronation was held on Passion Sunday, so the banquet afterwards held in Westminster Hall was with a Lenten fare. All the dishes were of fish rather than meat. 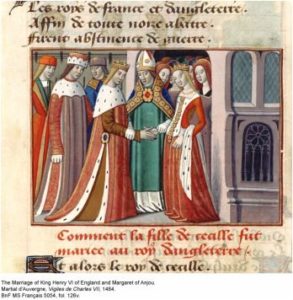 He married Catherine de Valois, daughter of Charles VI of France, at Troyes on 2 June 1420. Her coronation was held on Sunday, 23 February 1421 at Westminster Abbey. Henry Chichele, Archbishop of Canterbury conducted her ceremony. Three months later, Henry returned to France to continue his military campaigns.