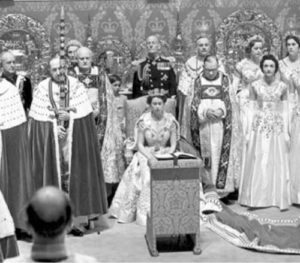 Archbishop of Canterbury Dr. Geoffrey Fisher presided over the Coronation ceremony of Queen Elizabeth II on 2 June 1953 at Westminster Abbey. Below are the words spoken of the Coronation Oath:

Archbishop of Canterbury: “Madam, is your Majesty willing to take the Oath?”

Queen Elizabeth II: “I am willing.”

Archbishop of Canterbury: “Will you solemnly promise and swear to govern the Peoples of the United Kingdom of Great Britain and Northern Ireland, Canada, Australia, New Zealand, the Union of South Africa, Pakistan, and Ceylon, and of your Possessions and the other Territories to any of them belonging or pertaining, according to their respective laws and customs?”

Queen Elizabeth II: “I solemnly promise so to do.”

Archbishop of Canterbury: “Will you to your power cause Law and Justice, in Mercy, to be executed in all your judgements?”

Queen Elizabeth II: “I will.”

Archbishop of Canterbury: “Will you to the utmost of your power maintain the Laws of God and the true profession of the Gospel? Will you to the utmost of your power maintain in the United Kingdom the Protestant Reformed Religion established by law? Will you maintain and preserve inviolably the settlement of the Church of England, and the doctrine, worship, discipline, and government thereof, as by law established in England? And will you preserve unto the Bishops and Clergy of England, and to the Churches there committed to their charge, all such rights and privileges, as by law do or shall appertain to them or any of them?”

Queen Elizabeth II: “All this I promise to do.”

The Queen then moved from the Coronation chair to the altar of Westminster and, kneeling, with her right hand on a bible, said:

“The things which I have here before promised, I will perform and keep. So help me God.”