The Honours of Scotland consist of the Crown, the Scepter, and the Sword of State. They are the oldest Royal Regalia in Britain and are housed in Edinburgh Castle.

The Crown of Scotland was made in 1540 for James V, King of Scots (1515-1542) and was made from an existing crown built in 1503. It was made from gold melted down from the previous one as well as using Scottish gold from the Crawford Moor mine. It is believed that it was made by French craftsmen.

The Scepter was also a gift to James IV, King of Scots by Pope Alexander VI (the infamous Roderic de Borja) (1431-1503).

For safety in times of unrest, the jewels were hidden first in Dunottar castle, then Kinneff church. Under the terms of the Treaty of Union in 1707, Scotland’s crown jewels were then stored in Edinburgh castle until 1818. 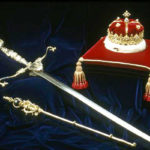