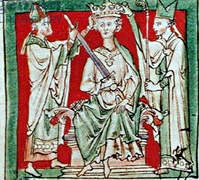 William Adelin, the only legitimate son of Henry I, died in the “White Ship” ship wreck off the coast of Normandy in 1120. Also on board the ship was Stephen of Blois. Stephen was the nephew of Henry I and survived the disaster. Williams death caused issues with the English line of succession when in 1135 Henry I died leaving only a daughter Matilda.

Henry nominated his daughter Matilda as heir in 1127 but she was not a popular choice. The Barons neither wanted a female ruler or a ruler from Anjou, France but agreement was that Matilda would rule with her husband, Geoffrey Plantagenet Count of Anjou. The other contender was Stephen’s elder brother Theobald who seemed content with his own lands and did not interfere with Stephen’s claim.

After Henry’s death, Stephen crossed the English Channel with the help of Hugh Bigod, a powerful English baron. Stephen wanted to assert his claim to the throne despite the fact that the claimant to the throne was Matilda. Stephen, with the support of the Barons, took the throne of England on 22 Dec 1135.

William de Corbeil, the Archbishop of Canterbury was persuaded to crown Stephen. It was argued that the oath of allegiance sworn to support Matilda was invalid as it had been exacted by force. A fictitious story was also put about that King Henry had changed his mind about the succession on his deathbed. Stephen was crowned at Westminster Abbey on the 26th of December 1135.

The civil war, known as the Anarchy, between Matilda and Stephen resulted in the defeat and capture Stephen at the Battle of Lincoln on 2 Feb 1141. Matilda attempted to be crowned at Westminster but her efforts collapsed in the face of bitter opposition from the people of London. Matilda was never formally declared Queen of England. The Battle of Winchester, 14 Sept 1141 resulted in Stephens release and on the 1 Nov 1141 and Stephen was restored to the throne. Stephen was again crowned King of England in Canterbury Cathedral, Kent on 25 Dec 1141.

At a council held in London on 6 April 1152, Stephen induced a small number of barons to pay homage to Eustace, his eldest son, as their future king; but the Archbishop of Canterbury, Theobald of Bec, and the other bishops declined to perform the coronation ceremony on the grounds that the Roman curia had declared against the claim of Eustace. Eustace died before his father on 17 August 1153.

The civil war between Matilda and Stephen continued with little success for either side. The Treaty of Wallingford (1152) made provision for the English crown to pass to Matilda’s son, Henry of Anjou (Plantagenet). Stephen’s legitimate children, Eustace and William would not succeed their father.  Another treaty, The Treaty of Westminster (Dec 1153) allowed Stephen to remain King of England for life. It also stated that Stephen had adopted Henry Plantagenet as his heir. Stephen’s second son, William, was to inherit all Stephen’s baronial lands.