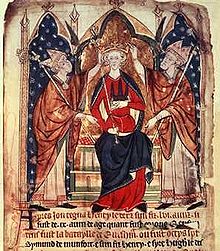 Henry III, also known as Henry of Winchester, was the  eldest son of King John and Isabella of Angoulême. Henry assumed the throne when he was only nine in the middle of the First Barons’ War on the death of his unpopular father, King John on 19 Oct 1216 .

Henry was crowned at the Abbey Church of Gloucester on 28 October 1216 with a circlet belonging to his mother. Prince Louis of France and rebels held the south-east. Due to the uncertain political situation at the time a coronation ceremony was hastily organised in Gloucester Abbey before the end of October. A simple gold circlet had to be used for a crown. Either Cardinal Guala Bicchieri or Peter des Roches, Bishop of Winchester performed the ceremony. Bishops of Worcester and Exeter anointed King Henry III.

Regents for the young king were William Marshal, Earl of Pembroke along with Hubert de Burgh. At the time of King John’s death, London and most of the channel ports were held by the French. In a popular move, Marshal announced his intention to rule by the terms of Magna Carta, the French invaders were driven out and peace restored in England. The great William Marshal, having served four generations of the Plantagenets with great ability, died in May, 1219, leaving de Burgh as sole Regent.

Pope Honorius III did not consider that the first coronation had been conducted properly. So on 17 May 1220, aged 12, Henry was crowned in Westminster Abbey, this time with all due ceremony. The ceremony was performed by Stephen Langton, Archbishop of Canterbury.