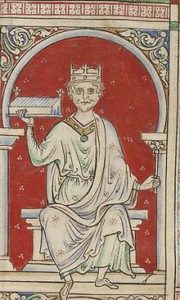 Following the custom set by his father, William was crowned in Westminster Abbey. Unfortunately there is no record of who attended although the Anglo-Saxon Chronicle records that Lanfranc, Archbishop of Canterbury performed the ceremony. The coronation was according to the Anglo-Saxon Christian tradition.