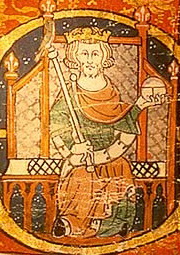 Edward I was also known as Edward Longshanks and the Hammer of the Scots and was the first son of Henry III and Eleanor of Provence. Norman-descended Plantagenets did not count their Saxon predecessors as legitimate dynasts, so Edward was named the first. Edward’s marriage was arranged by his father for political reasons at the age of fourteen to thirteen-year-old Eleanor, the half-sister of King Alfonso X of Castile. They married on 1 November 1254 in the Abbey of Santa María la Real de Las Huelgas in Castile.

Edward was in the Holy Land on Crusade when he heard of his father’s death on 20 November 1272. However, he did not return to England until 2 August 1274. Coronation preparations were well underway by this time and plans including who would be the key role players debated at hearings. Large quantities of food for the feast, including 60 oxen and cows, 60 swine, 2 fat boars, 40 bacon pigs and 3000 capons and hens from Gloucestershire were ordered. Bishops, abbots and priors were requested to prepare swans, peacocks, cranes, rabbits and kids, as many as they could. Money was spent preparing Westminster Abbey. New lodges, kitchens and stables were built. The great hall was redecorated and new stone thrones installed. Covered walk ways were built between the palace and the abbey church.

The day before his coronation, Edward triumphantly entered a much decorated London.

His coronation, with Eleanor, in the Abbey took place on 19 August 1274. They were the first king and queen to be crowned during the same ceremony since the Norman Conquest. The conduit at Cheapside ran with red and white wine for all to drink. Unfortunately little is recorded of the actual coronation service but was probably based on tradition. It is believed Edward’s oath may have agreed to maintain the laws of his predecessors and to preserve the rights of the crown. Robert Kilwardby, Archbishop of Canterbury placed the crown on Edward’s head. Edward then removed the crown declaring he would not wear it again until he had recovered lost lands his father had granted away.

Following the ceremony the feasting began. The story goes that King Edward was seated at the banquet when the king of Scots, earls of Lancaster, Cornwall, Gloucester, Pembroke and Warenne approached the king, all with a hundred knights. They dismounted, setting their horses free for anyone to catch and keep. An extraordinary celebration embellished with enthusiasm and optimism.

King Edward I commissioned a Coronation Chair in 1296 to contain the coronation stone of Scotland which is known as the Stone of Scone or Stone of Destiny. This stone had been captured from the Scots who kept it at Scone Abbey. The Coronation Chair, known historically as St Edward’s Chair or King Edward’s Chair, is a wooden throne on which the tradition has now evolved for the British monarch to sit when they are invested with regalia and crowned at the coronation. The chair was named after Edward the Confessor and is kept in his shrine at Westminster Abbey. The high-backed, Gothic-style armchair was carved from oak at some point between the summer of 1297 and March 1300 by the carpenter Walter of Durham.

After the death of Eleanor of Castile in 1290, Edward married Margaret of France at Canterbury on 8 September 1299. Margaret was never crowned, thus being the first uncrowned queen since the Conquest.