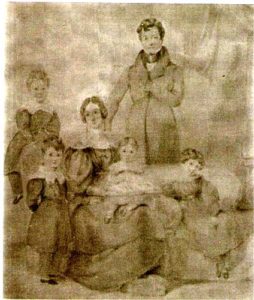 William the Conqueror’s twenty-fifth times grandson was a convict by the name of Kennedy Murray. Kennedy’s crime was shopbreaking & theft from a travelling saleman. He stole  six knives, a pair of striped garters and some knittings with a pair of plated buckles. Kennedy was convicted at Glasgow Court of Justiciary for which he received 14 years in 1790 . It doesn’t take many generations to go from grace to disgrace!

He travelled with 402 other convicts on the ship called the Pitt, departing in June, 1791 and arrived in Sydney Cove, New South Wales, Australia on 14th February, 1792 .

He married Anne White, circa 1796 at Norfolk Island, Australia. They had two children before Murray left the island for Tasmania in 1805. By 1809 he was back in New South Wales and had been granted 30 acres of land on the Nepean River.  One of Kennedy’s children, Elizabeth, married James Lucas, son of First Fleet convicts Nathaniel Lucas and Olivia Gascoigne.

In 1814 Kennedy Murray was living in a common law marriage with Ann Parker.

There has been much debate about Kennedy’s heritage. Thanks to all those that have emailed me.

One potential family tree from William the Conqueror to Kennedy Murray is below:

Other interesting genealogy of Kennedy Murray include the following possibilities:

Disclaimer: These posts may include affiliate links. If you click one of them &/or buy online, we may receive a small commission at no extra cost to you. Thank you for helping keep this historical website alive!