In 1649 England briefly became a republic. Oliver Cromwell, acting head of state, ordered that the Royal regalia be melted down as they were then considered to be redundant. The precious stones were sold separately. A few items were sold intact. Legend is that one of the original crowns, possibly the diadem, had been salvaged by a band of Cavalier soldiers, its whereabouts never revealed.

Charles II was restored to the throne of England and Scotland in 1660. Of the original items only the ampulla, the spoon, the coronation chair and possibly some of the swords have survived. Metal recovered from the old Saint Edward’s Crown was hastily incorporated into a new crown for the coronation of Charles II. This crown, still known as St. Edward’s Crown is used in modern coronations.

A number of other items were made specifically for the coronation of Charles II:

The Sceptre with the Cross is placed in his right hand at the Coronation and is made of gold.

Sceptre with the Dove – symbolising the Holy Ghost

The Sceptre with the Dove is a rod of gold measuring three feet seven inches in length. From the top of the mound rises a golden cross with a white enamelled dove; the eyes, beak, and feet are of gold.

The Ampulla – is a golden eagle flask which holds the consecrated holy oil which is poured into the coronation spoon to anoint the Sovereign. 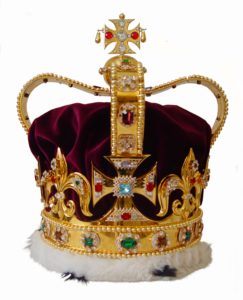 St Edward’s Crown. This historical piece is the official coronation crown and was used in the coronation of Queen Elizabeth II, King Charles II, George V and several other British monarchs. Due to its weight a majority of former monarchs have actually chosen not to be crowned with this piece of history, but it was often kept as part of the ceremony.

The crown comprises of 444 precious gemstones which include citrines, topazes, amethysts, tourmalines and sapphires. In the past they were actually hired rather than an actual part of the crown. The crown weighs 2.23kg. The historical piece is thus the frame and not the diamonds, emeralds, etc. However in 1911 the jewels were set permanently, completing the crown for future generations.

It was worn at Christmas in 1065 by the famous St Edward the Confessor to whom this crown owes its name. It is rumoured the origins of this crown go even further back in British history as some say St Edward’s Crown incorporates parts of the crown of Alfred the Great who reigned in the 9th century.

A two-dimensional form of the crown is also used as a symbol on many a coat of arms, military emblems, police badges and various logos indicating a relation to the British royalty.

The Sceptre with the Cross is special for containing the Great Star of Africa, the world’s largest diamond which weighs 530 carats. The Great Star of Africa was the largest part of the Cullinan I, the largest diamond ever found (3106.75 carats). This sceptre, which symbolizes temporal power, is presented to the Sovereign near the end of the coronation ceremony and is held in their right hand.

When both the Sceptre with the Cross and the Sceptre of the Dove are held by a British monarch, the St Edward’s crown will be placed and he or she will be crowned King or Queen of England.

The Curtana is also known as the Sword of Mercy as its end is blunt and squared to symbolize mercy and the monarch’s authority and role as a leader in war. The sword has its links back to the legendary sword carried by Tristan and Ogier the Dane. In the legend of Ogier the Dane an angel appears as Ogier is about to kill one of Charlemagne’s son, and knocks the sword out of his hand, breaking the tip. The sword measures 96.5 centimetres (38 in) long and 19 centimetres (7.5 in) wide at the handle. About 2.5 centimetres (1 in) of the steel blade’s tip is missing. The blade features a decorative ‘running wolf’ mark which originated in the town of Passau, Lower Bavaria, Germany. It has a gilt-iron hilt, a wooden grip bound in wire, and a leather sheath bound in crimson velvet with gold embroidery that was made in 1821. It’s origins date back to the reign of Henry III of England as one of three swords employed in the coronation of Queen Eleanor of Provence in 1236s.

The coronation tradition involving three swords with the Curtana being the principal one dates back to at least to Richard I (reigned 1189–99). Swords symbolise different aspects of the sword offering. They

are called the Sword of Spiritual and Temporal Justice and the Sword of Mercy (Curtana). The custom of bearing 4 swords was probably initiated by Henry IV in 1399.

The Jewelled Sword of Offerings is the only one actually presented to the Sovereign by the Archbishop of Canterbury during the coronation ceremony.  Originally made for the coronation of George IV in 1911, the blade is made of steel with the hilt and the scabbard decorated with thousands of precious stones of diamonds, rubies and sapphires.

Until the 14th century, it was the job of the Earl of Chester to carry the sword before the monarch at his or her coronation. Today, another high-ranking peer of the realm is chosen by the monarch for this privilege.

The ring is a symbol of faith denoted by its unbroken form. It has been a constant feature of English coronations since the 10th century. During the coronation ceremony, the Sovereign’s Ring is placed by the Archbishop on the fourth finger of the Sovereign’s right hand and represents kingly dignity. 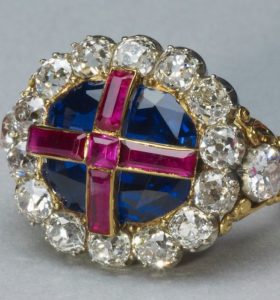 At one point every new king got a new ring, symbolizing his “marriage” to his country, and it was his to keep. The present Monarch’s ring was made for the coronation of William IV in 1831. It weighs 84.45 carats and is set with a large sapphire surrounded by diamonds. Two more diamonds decorate the shank and five rubies are set on the sapphire in the form of a cross. 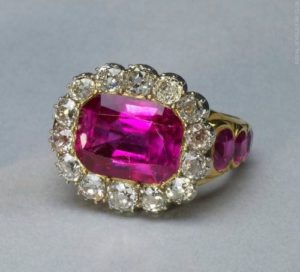 The Queen Consorts ring was made for Queen Adelaide at the coronation of her husband William IV in 1831. It weighs 50.15 carats and is set with a large ruby which is surrounded by 14 diamonds ad rubies around the shank. The ring has been worn by Queen Alexandra, Queen Mary and Queen Elizabeth the Queen Mother.

William IV left his ring to his widow, Queen Adelaide, who had also been given the Queen Consort’s Ring. She left both rings to Queen Victoria, whose fingers were too small to fit William’s ring and so had made a smaller copy (Queen Victoria’s Coronation Ring) for her use in 1838. Victoria willed all three to the Crown, and every monarch since Edward VII has used William’s ring.

The Coronation Spoon has an oval bowl, divided into two lobes, engraved with acanthus scrolls. The bowl is joined to the stem by a stylised monster’s head, behind which the stem flattens into a roundel, flanked by four pearls, and a band of interlaced scrolling, with another monster’s head; the end of the tapering stem is spirally twisted, and terminates in a flattened knob. One suggestion is that the divided bowl was designed in this fashion so that the archbishop might dip two fingertips into the holy oil.

It is the oldest piece and dates back to St Edward coronation in 1349 when it was first recorded as part of the regalia. The small pearls were added to its decoration for Charles II coronation in 1661. 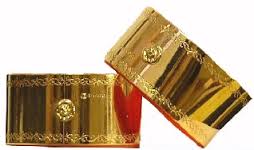 The Armills are symbolic of the Sovereign’s sincerity and wisdom.  For the coronation of Queen Elizabeth II, she was presented with 22 carat gold Armills that are lined in red velvet with Tudor rose clasps as a gift from the Commonwealth governments. An older set still exists today and knownas the King’s Armills. They were made in 1661 and decorated with enamelled pictures of roses, thistles, harps and fleurs-de-lis.